A Timeline for Survival 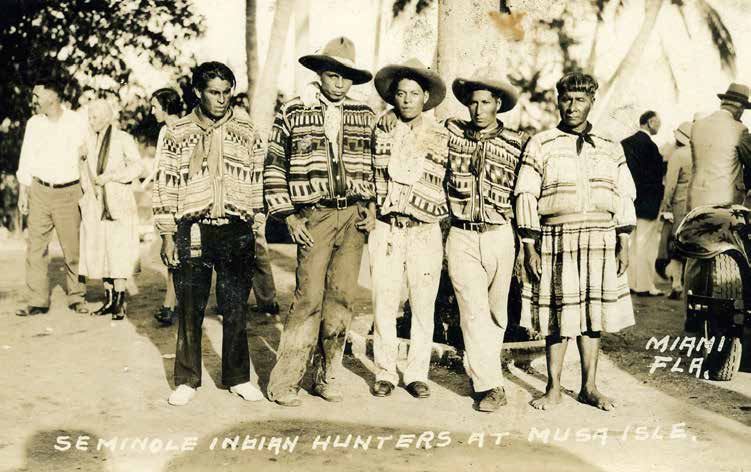 Ancestors of the Seminoles have lived in what is now the Southeastern United States for at least 12,000 years. Only the years since 1510, about four percent of the Tribe’s history, have been touched by European culture. To say that touch has been profound would be a gross understatement. The indigenous population of the Florida peninsula, estimated at 200,000 in 1500, is less than 3,000 today. Meanwhile, the total current population of Florida exceeds 14 million. The Seminoles, Miccosukees and related Indians have struggled to survive in Florida despite heavy odds, including three undeclared wars with the United States.

The Seminole Wars resulted from many factors: broken treaties which would have preserved as much as five million acres of Florida (land on the Tribe’s six modem reservations encompasses less than one-fiftieth of that, none of it prime coastal land), expansionist desires on the part of the growing United States, and the friction that arose when Seminoles gave safe haven to escaped slaves.

Such conflict produced one of the great Native American leaders, Osceola, whose courage and cunning defined the Seminole resistance before he was taken under a flag of truce and died in a South Carolina prison in 1838. Ironically, it was Osceola’s refusal to give up, even stabbing a treaty in an act of legendary defiance, that most characterized the man and his tribe.

The Seminole Wars also helped produce two American presidents, Andrew Jackson, who enhanced his reputation as an Indian fighter by raiding villages in North Florida, and deporting Indians to the western wastelands, and Zachary Taylor, who gained national prominence as an Indian fighter, despite losing the great Battle of Okeechobee on Christmas Day 1837. As Taylor watched from the rear of his 1,000 troops, no more than 500 Seminoles including Sam Jones (Abiaka), Coacoochee (Wildcat), Alligator, and the Prophet, killed 26 soldiers and wounded more than 100, while suffering only 11 casualties themselves.

Often called the First, Second, and Third Seminole Wars, the conflicts of the first half of the 19th century, were in fact one long battle waged against the Seminoles, killing and pushing survivors further into the South Florida wilderness – or removing them to Oklahoma in the Seminole’s own Trail of Tears.

The 20th century saw the re-emergence of those Florida Seminoles who had resisted removal, and survived economically by selling plumes, hides, fish and game to whites on the edges of the Everglades, at trading posts like Smallwood in Chokoloskee, Brown’s Boat Landing in Big Cypress, and Stranahan in Fort Lauderdale. Other Seminoles profited from the early boom in Florida tourism by selling crafts and wrestling alligators.

The 1920s closed with two profound events, the completion of the Tamiami Trail, which opened Florida’s last frontier, and the deadliest hurricane in history, the 1928 storm, which whipped the waters of Lake Okeechobee into a tidal wave that drowned an estimated 4,000 people.

In the 1930s and 40s, American Indians were treated as orphaned wards by a federal government preoccupied with world conflict. After World War II, a policy of termination and assimilation was pursued by the United States. Again, the Seminoles were among the resisters, demanding a settlement for lands lost, writing their own constitution and receiving federal recognition in 1957. For the next 40 years, the Tribe moved toward the new millennium as a prosperous economic and political force in the State of Florida. The following pages provide a timeline glimpse into the Seminoles’ wild ride through Florida history. Separate events, a broad perspective, one view of the history of a people, and a story of survival against all odds.

“WHEN WE VIEW THE HISTORY
OF THE SEMINOLES OVER
THEIR THOUSANDS OF YEARS
IN THE SOUTHEAST, WE FIND
THAT WE MUST FOCUS ON
THE MIRACULOUS STORY
OF THEIR SURVIVAL, RATHER
THAN ON THE TRADITIONAL
HISTORICAL IMAGE OF THEIR
DESTRUCTION.”

Hernando DeSoto explores Southeast; this is the first contact with a white person for many tribes.

The Treaty of Paris places Florida under the rule of Britain. Multiple southeastern Indian groups

are living in North Florida and are already called cimarrons by the Spanish. This name

Towns like Cuscowilla and Chocachatti are  established in Florida by several Native American groups. 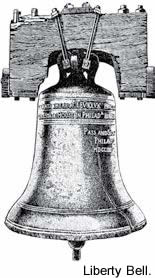 1776
The Revolutionary War forms a new nation, the United States of America.

1784
Alexander McGillvray, a Creek leader, negotiates the Treaty of Pensacola with Spain for Muscogee Creeks.

Subjected to repeated raids by American plantation owners, the Spanish Governor permits Florida Indians and former slaves to attack Georgia. Illegally established American settlements on the St. Johns River are the first to be besieged. 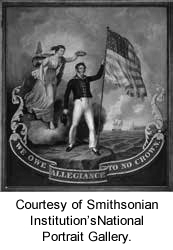 September 1812 – October 1812
Two months in which Seminoles and their allies engage in multiple skirmishes with Georgia volunteer soldiers. Colonel Daniel Newnan and his Georgia volunteers are detailed to attack Chief King Payne and the Seminole town of Lotchaway (Alachua).

1813 – 1814
The First Creek War begins in Alabama, forcing native survivors to flee southward, where they join together with natives of Florida. During this time, General Andrew Jackson rises to power.

December 26, 1817
Andrew Jackson is given the authority by the Secretary of War to take command of the situation along the border between Florida and Georgia and bring the Seminole under control.

1819 – 1821
Spain surrenders Florida to the United States with the Adams-Onís Treaty. Andrew Jackson is then appointed by Congress as the first governor of Florida Territory.

September 18, 1823
The Treaty of Moultrie Creek is negotiated between Governor William Du Val and the Florida Indians officially ending the First Seminole war.

May 28, 1830
The Indian Removal Act is passed in Congress and signed by President Andrew Jackson. All tribes east of the Mississippi River are to be removed to the west.

1832
Indian Agent James Gadsen offers the Treaty of Payne’s Landing. In it the Seminoles would agree to move to Oklahoma, but first, a party of tribal leaders would survey the proposed land.

March 28, 1833
Agent Phagen coerces chiefs surveying the land in Oklahoma to sign the Treaty of Payne’s Landing. However, none of the chiefs had the power to agree to the land for all Seminoles.

April 3, 1835
Indian Agent Wiley Thompson tells Seminole leaders the Treaty of Payne’s Landing was signed and to begin relocating. Seminole leaders refuse to honor the treaty: the chiefs were coerced and they did not have the authority to accept.

December 28, 1835
The Seminoles are led by Osceola in the Battle of Withlacoochee. Another band slays Major Francis Dade and kills 105 soldiers en route to Fort King (Ocala). The Second Seminole War begins.

Seminoles attack soldiers under the command of General Gaines at Withlacoochee River. 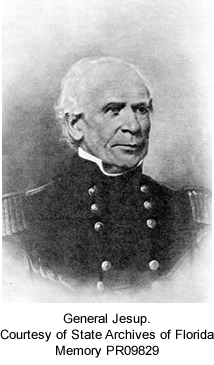 June 2, 1837
Osceola, Abiaka and Coacoochee Wild Cat appear at a Seminole encampment near Fort Brooke before dawn. By daybreak a group of Seminoles waiting to emigrate are persuaded to disappear into the Florida swamps with supplies of food and ammunition.

October 21, 1837
Osceola and several other Seminoles are captured under a flag of truce and sent to Fort Moultrie, South Carolina.

December 25, 1837
The Battle of Okeechobee takes place. One thousand troops under the command of General Zachary Taylor’s command fight against a Seminole force of 500, led by Abiaki, Coacoochee, Alligator, and others. Of the 37 casualties, 26 are U.S. soldiers. 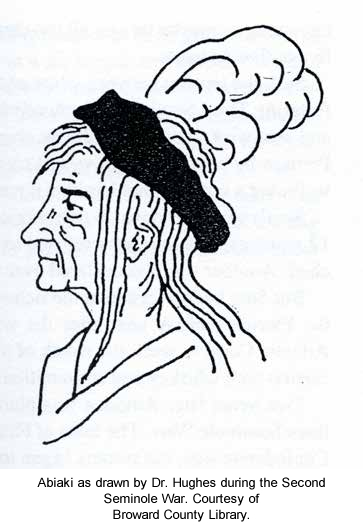 January 31, 1838
Osceola dies in prison and is buried at Fort Moultrie, South Carolina.

May 10, 1842
President John Tyler declares the Second Seminole War over. No treaty was signed.

December 20, 1855
Seminoles under Billy Bowlegs attack the camp of U.S. Army Surveyors. The surveyors’ unofficial purpose was to find the location of Abiaki’s camp. The Third Seminole War begins.

August 7, 1856
A delegation of Oklahoma Seminoles signs a treaty in Washington agreeing to accept payments for western Seminoles. This is the first time the Seminoles are officially recognized as separate from the Creeks by the U.S. government.

May 8, 1858The Third Seminole War is declared over with the capture of Billy Bowlegs. As Bowlegs is shipped off, one prisoner escapes and makes it back to Florida: Polly Parker. A few hundred Seminoles remain in isolated parts of Florida, including Abiaki. The U.S. government finally abandons all efforts to remove the Seminoles.

1860s - 1890s
Seminoles and whites begin to trade peacefully along the borders of the Everglades. Besides white traders, the Seminoles have contact with very few non-Seminoles preferring to hunt, farm, and live isolated in the Everglades.

1900 – 1920s
Drainage of the Everglades and the creation of a railroad line open up Southern Florida to settlers and tourists. As coastal camps disappear to development, some Seminoles settle into tourist camps, selling crafts, and wrestling alligators for income.

1907
The Department of the Interior sets aside 540 acres in Dania, Florida, making it the first Seminole reservation in the state of Florida.

1916
The oldest known piece of patchwork is created. This distinctive and colorful way of creating patterns in clothing becomes synonymous with the Seminole people. 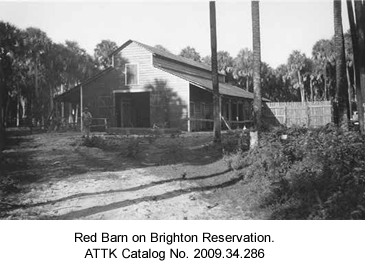 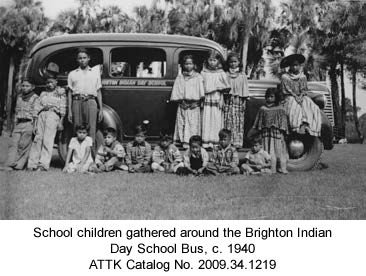 1946
The U.S. government creates the United Indian Land Claims Commission. The Seminoles file for a settlement to recover lost lands.

1947
Students from Florida State University choose the Seminole as the official School Mascot.

1957
The Seminole Constitution is ratified by a vote of 241-5. The Tribe gains federal status as the Seminole Tribe of Florida. The government consists of a Council and a Board. Billy Osceola is elected as the first Chairman. Frank Billie is the first Tribal President; he resigns and is succeeded by Bill Osceola. 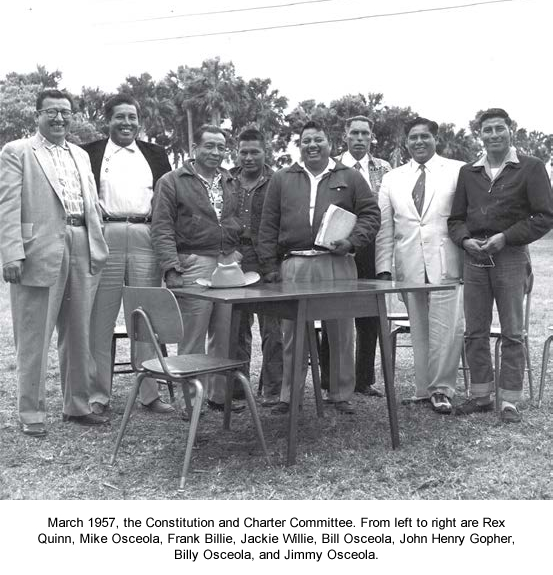 1962
The Miccosukee Tribe gains recognition from the U. S. government. Buffalo Tiger serves as the first Chairman until 1986. Several Seminole families chose not to join either Tribe, remaining to this day Independent Seminoles.

1963
The first Seminole newspaper, Smoke Signals, is published. In 1973, it is renamed Alligator Times, and finally, the Seminole Tribune in 1981. 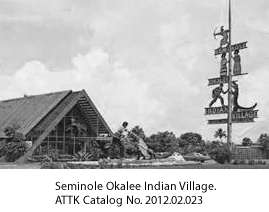 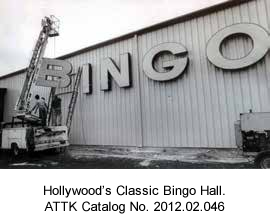 1971
Howard Tommie is elected as Chairman. His eight-year term sees the advent of taxfree cigarette sales. Bingo is introduced and negotiations for bingo rights begin. Fred Smith is elected as President.

1979
James E. Billie is elected as Tribal Chairman. Bingo becomes the biggest source of income for the Tribe. 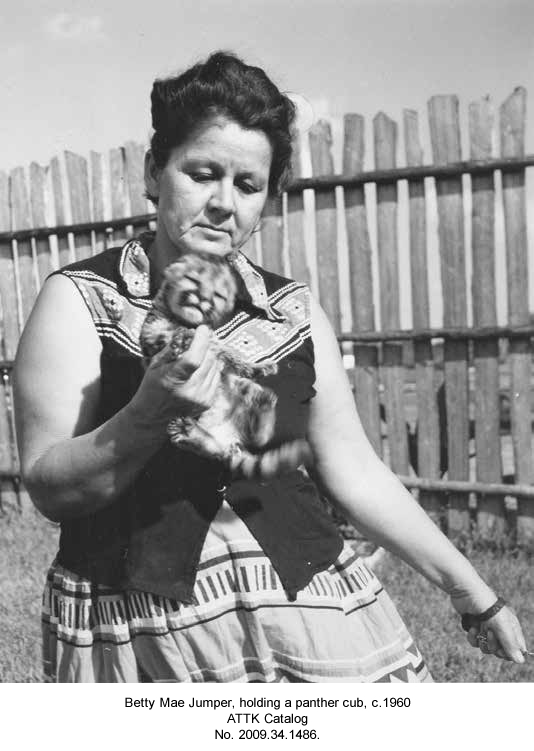 1984
Chairman James E. Billie is arrested for killing a panther for medicine man Sonny Billie. The trial tests the rights of Tribal sovereignty. The Chairman is acquitted.

1988
The National Indian Gaming Regulatory Act is passed, setting limits on Class III games. Casinos are set up on the Hollywood, Immokalee, and Tampa reservations. The Seminole Tribe of Florida and the State of Florida agree on a water compact allowing the Tribe more control on their water resources.

1992
Seminoles from Florida and Oklahoma collect land claims against the U.S. for unconscionable acts during the Seminole Wars. With interest, the Seminole Tribe of Florida nets almost $10 million.

1995
The Tribe moves headquarters to new four-story building in Hollywood.

1997
The sovereignty of the Tribe is challenged by National Indian Gaming Commission & U.S. Attorney. The Seminoles assume full management of gaming activities on the Hollywood Reservation. 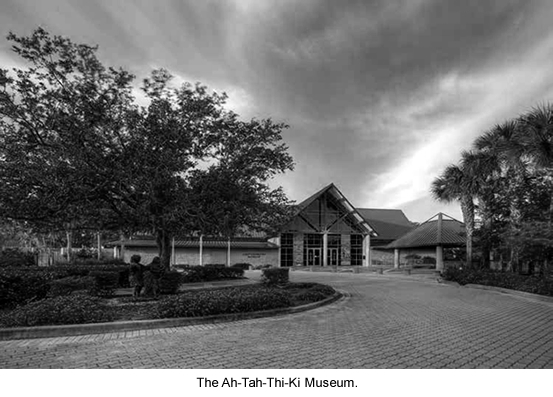 1999
Groundbreaking for the Coconut Creek and Brighton Casinos. 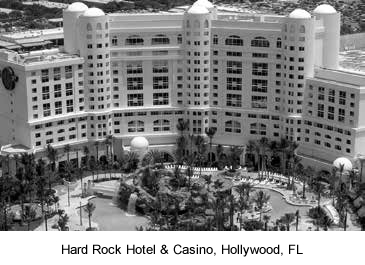 2002
The Brighton Reservation creates a language and culture school that meets every Friday. Seminole students attend instead of going to their public school classes. 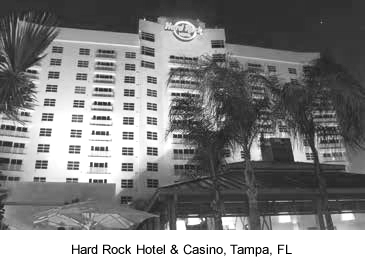 August 25, 2007
The Seminole Tribe of Florida celebrates the 50th anniversary of the signing of its constitution and corporate charter.

2007-2008
Pemayetv Emahakv Charter School opens for its first academic school year. This school was born out of the language and culture school started in 2002.

April 29, 2010
The Gaming Compact with the Seminole Tribe of Florida is signed into law by Florida Governor Charlie Christ. It took 20 years to reach this agreement.

2011
James E. Billie is re-elected as Chairman and Tony Sanchez is elected as President.

2015
The Seminole Tribe of Florida inaugurates their first court system.